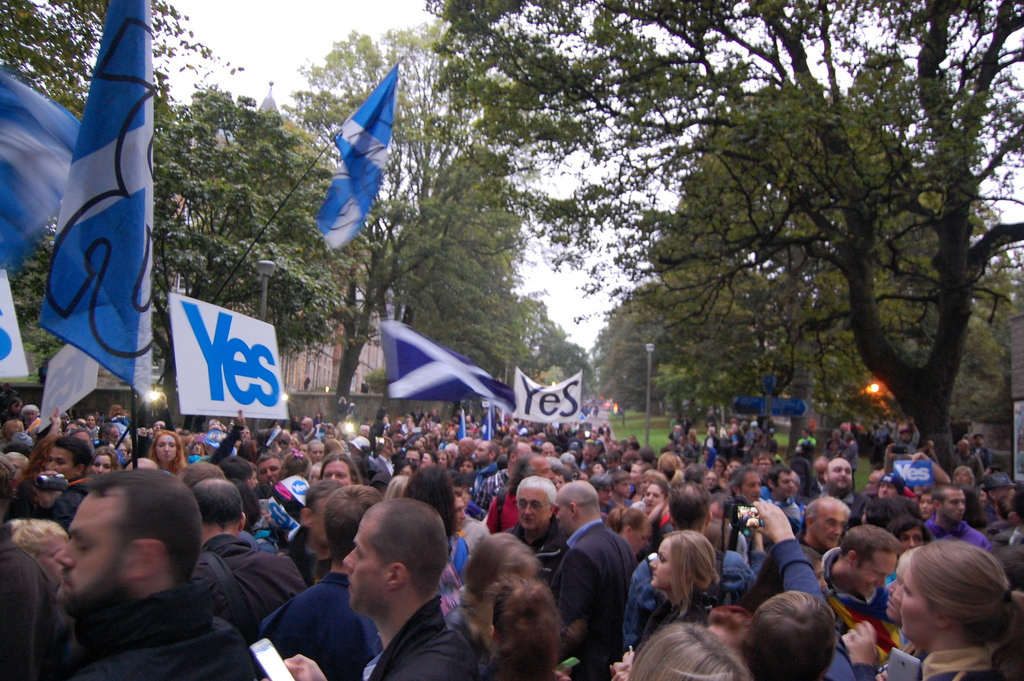 This article was initially published in SME Insider.

Kat Heathcote is not a nationalist. In fact, she’s not even Scottish – she’s a Labour-voting Welsh woman whose publishing business exports mainly to Singapore. But in Thursday’s referendum, she’s voting yes.

“Directly, it doesn’t affect my business,” she says, “[but] a country that has 60% of Europe’s oil and 20% of the world’s fish stocks should be a wealthy and successful country.”

Kat feels that the only way to get the “joined-up thinking,” and technological investment needed to rejuvenate the country’s shipping industry – one of the largest in the world – is to install a local-minded government that makes this a priority for the businesses that are located in the region.

Like many Scottish business owners, Kat suspects the UK government of having its interests firmly lodged in London’s financial district, to the neglect of other areas. Having worked in the financial sector herself and witnessed the impact of boom and bust, she suggests that a return to “real” assets, resources and manufacture could make Scotland stronger in the long run.

Many hope that the strength of these industries could safeguard Scotland’s place in the European Union, too. Despite widespread speculation that Spain would block Scotland from entering the EU in order to dissuade its own secessionist movements in Catalonia and the Basque, it was noted that Spanish journalists at Alex Salmond’s press conference last week asked only about their country’s continued access to Scotland’s fishing waters. This, Kat says, hints at the true priorities behind the “hyperbole” – when it comes to Scotland’s place in Europe, perhaps the message there is “better together,” too.

Even Scottish business owners on the no side seem skeptical that their EU membership is really in jeopardy. Although there would be “huge ramifications” if the country was to be isolated, this is not a main concern, as Robert*, a no voter, says. The real worry, he tells us, is the currency.

The yes campaign may be confident that rUK refusals of a currency union are all bluff (“It’s unlikely that the British would shoot themselves in the foot with their biggest trading partner,” says Kat), but others are less convinced. Robert, who asked for his name to be changed, says that currency fears are central to the mounting uncertainty that, he feels, could push Scotland back into a “recession” mentality, “holding on to their money until they’re sure.” This could spell disaster for his business, a massage therapy venture in Edinburgh, which relies on the disposable income of its well-to-do client base.

Since both sides of the campaign have been hazy on the details of how “the average person” would actually be better off, Robert feels that, in his industry, the risk just isn’t worth the potential gain. “I’m very sympathetic to yeses,” he says sadly, but: “there is no incentive for a small business to vote yes.”

These are not sentiments which Robert, an Englishman, says feels comfortable expressing publicly. Whilst he recognises that they make up a very small segment of the overall movement, there is a faction of yes voters, he says, whose tactics rely on intimidation rather than democracy. “I’ve heard stories of a girl getting punched in the face at the station because she was voting no, of SCUM painted on doors of no voters,” he says. Although many English people he knows are actually in support of independence, “they will have to be careful where they go for a while,” especially if the union is upheld. “It’s going to be very nasty either way,” says Robert.

Kat, too, agrees that there may be “a large silent group out there” of no voters, but also highlights the infectious wave of grassroots enthusiasm that has so successfully galvanised the yes campaign and led to a record 97%  voter registration at the polls. Only one other factor appears to have had as much success in winning people over to independence: the Conservative-led no campaign.

“Cameron coming up here was just so embarrassing,” says Robert of the Prime Minister’s uncomfortable last-ditch attempt to win over the electorate. Kat is more amused. “It was a hoot!” she says of the equally unsuccessful 60-strong Labour Party pilgrimage, before commenting on George Galloway’s arrival: “It’s like there’s a secret conspiracy [by the government] to get a yes vote.”

Accusations of insincerity, exaggeration and bullying have been levied at both Cameron and Salmond, but where Salmond may be felt by many to be guilty of evasion, Cameron’s mishandling of the campaign appears be derided by all. Both Kat and Robert feel that a series of Tory misfires have served to turn a largely ambivalent nation who were likely to vote no into a passionately split one that is too close to call. First, there was the refusal to offer max devolution as a voting option, perceived as a smug show of arrogance that Scotland would never dare leave. Then, there was the sexist video campaign that became an overnight meme and helped to push many no-voting women towards the yes campaign. Finally, there is Cameron’s desperate carrot-and-stick approach, alternating between hurried offerings of political powers, threats of economic isolation and begging for forgiveness. No wonder Scotland is unimpressed.

“It would have been a Devo Max [if that had been an option],” says Kat. But, when it comes to the forced yes or no decision: “Yes is a word you want to say.”

Should a currency union agreement be reached, and should Scotland retain its place in the EU, it seems unlikely that much would change for the worse for SMEs in Scotland – but these are two very big ifs. However, the one card that the UK government has played with some success is refusing to give a picture of what rUK interactions with an independent Scotland would actually look like. The last-minute offers on the table, with little explanation of what the new powers would really involve, add to this confusion, preventing the Scottish public from gaining a clear idea of what it is they are really voting for. The Tories seem to hope that, like the much-parodied “patronising yes lady” of the video campaign, they will just give up and decide against the risk.

Perhaps one clue to the feasibility of an independent Scotland is that, despite the flurry of activity over the past few weeks, the behaviour of major companies and financial institutions over the years leading to referendum has not suggested panic. “This has been going on for two years and there has been more inward investment in those two years than ever,” says Kat. “The market is not behaving as if it’s concerned”

Robert disagrees. “If you look at the numbers, it doesn’t add up,” he says. “But I hope I’m wrong.” He adds: “I feel as Scottish as I do English. I think it’s a brilliant country. Something pretty drastic would have to happen to make me move.”

*Name has been changed.